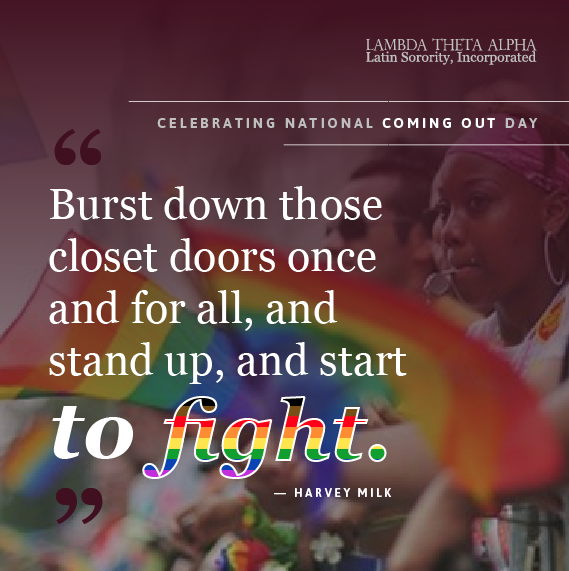 Today in honor of National Coming Out Day (NCOD), the National Gender Identity Special Committee collected experiences from members who submitted their personal “coming out” stories in regards to their sexual orientation and/or gender identities. We celebrate the diversity and pride we have across our membership for our lesbian, gay, bisexual, transgender, queer/questioning, intersex, asexual and ally (LGBTQIAA) sisters and siblings.

NCOD was founded on October 11, 1988 by Robert Eichsberg and Jean O’Leary, marking the anniversary of the 1987 March on Washington for Lesbian and Gay Rights. Since then, on or near October 11th, thousands of gay, lesbian, bisexual, trans, queer, two-spirit people and allies celebrate NCOD with workshops, panels, rallies and other events aimed at showing the public that LGBTQIAA people are everywhere and to help give people that want to come out a day in which they will find a community. “When I was 15 I came out to my sister-in-law in the parking lot of my middle school. The reason why I decided to tell her was because we had become very close and I knew she wouldn’t judge me. As soon as I said I was into girls, she just laughed and said to me “Okay Ale, I already knew that” and I remember just being in shock. She mentioned to me that she could see my Queerness since I was 10 years old and was just a matter of time. The talk with my mom and brother was different that night. I remember my mom crying and my brother confused. There were periods of time where it was difficult for my mom to even speak to me. After asserting my sexuality and what I wanted, she became more accepting. Having such an amazing chapter like Gamma Psi and the love and respect I receive from my 8 beautiful line sisters and amazing PM and APM has given me the confidence that I can be a Queer Lambda Womxn and be unapologetic about it.” “I first came out to my sister when I was 24. We’ve been attached at the hip since I was born, so I knew she would accept me for who I am. It also helped that she too is part of the LGBTQ+ community. I knew that she would be the perfect person to seek guidance from. She’s been my biggest role model through all of this, just by being herself. She taught me the beauty in accepting myself and living unapologetically. Coming out was a decision I made on my own, but LTA made the journey more beautiful than it already was. I was initially scared to come out to sisters, but doing so allowed me to bond with sisters from all over the country. The support I’ve received from sisters, reminding me to be myself and to do so with pride, has been greater than I ever imagined.” “I was 15 when I first came out to my best friend. He was the one who encouraged me to find my sexual orientation and was always very supportive. Even though my best friend, at the time, was really supportive at the time we parted ways and after that I never had a big support. Most, only, my friends knew at the time and I still had a lot of internalized biphobia/homophobia. It was hard at first, and I never really had someone to talk to about it. It’s okay to not “come out” right away. Take your time and don’t let anyone pressure you into coming out. And if someone outs you, don’t be too embarrassed or afraid. Regardless, love yourself no matter what someone says about you.” “I first came out to a trans friend named Mac who I met on a LGBT spring break trip. When we were having a deep conversation as a group, he shared his story of coming to realize his gender identity and talked about how circumstantial gender is. Over the course of this week and the following month, I thought a lot about how gender related to me personally and came to realize that I do not ascribe to the gender binary and do not feel like a girl (whatever that may mean). So when I discovered this about myself, Mac was the first person I told. When I told him, he grinned, gave me hug and told me how proud he was. My Lambda siblings were some of the first people I told and have shown me unconditional support. At convention, it was great to see the work that LTA is putting into become a more accepting sorority. Seeing so many queer siblings at the diversity workshops was empowering and discovering the queer community within LTA made me realize that there will always be a group that I feel at home with no matter what.” “The first people I came out to was my line sister, my chapter sister and my PM. I chose these people because I knew that they would love me unconditionally and support me in this process. I would say my mom, aunt and sister have been my biggest supporters. My aunt helped me during my coming out process and was there for me when I came out to my mom. Her ability to be there for me and validate that my experience was ‘normal’ and nothing to hide from my family. My sister knew since day one and has been an incredible ally in my process. I am very privileged in that my mom is extremely supportive. Having her go to pride with me was a life changing experience that confirmed my mom is in fact my biggest ally. The universe has a way of placing people in your life that serve a purpose. Being around queer sisters who were so empowered and owning their identities inspired me to be open and proud of all of my identities. Specifically my PM who showed me the power behind being yourself unapologetically.” “The first person I came out to was myself. I feel this relationship and the process of connecting with ourselves during the coming out process is often overlooked. I knew if I chose to come out, it would feel like the world was against me, so I wanted to make sure if it felt like no one loved me, I knew I loved myself. I’ll never forget the sad understanding I had that once I became true to myself, my life would become harder but I also remember the feeling of hope I had in my heart, wholeheartedly knowing that it would be worth it. I would tell them the moment you start living your life authentically and unapologetically, is the moment you truly start to live. The journey ahead is scary, but I promise you it’s worth it. And your community is here for you every step of the way.”