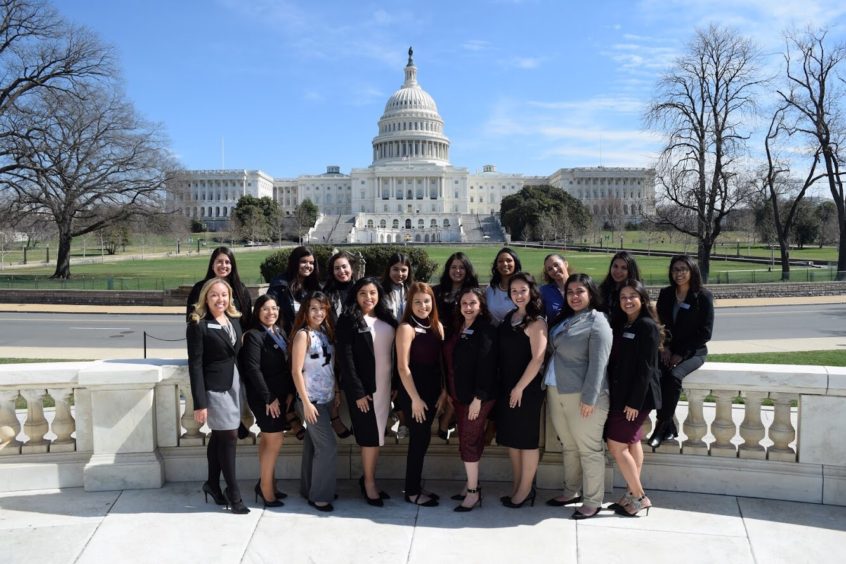 Washington, D.C. – On Feb. 28 and March 1, Lambda Theta Alpha Latin Sorority, Inc. hosted its second annual event on Capitol Hill called Lambda Hill Days. As the March 5 deadline approached for Congress to pass a permanent solution for the Deferred Action for Childhood Arrivals (DACA) program, the two-day advocacy initiative came at a critical time. Sorority members met with over 25 congressional offices to push for comprehensive immigration reform.
Prior to the meetings, FWD.us staff briefed the 21 participants on recent updates concerning immigration and shared best practices on lobbying. While meeting with policymakers, sorority members shared personal experiences and stories from their respective communities in hopes of igniting change and making immigration reform a priority for the 115th Congress.
“This event provided me an opportunity to civically engage in my government on a federal level,” said Jennifer Rincones, one participant from Michigan. “The experience only further proves that our elected officials must be held accountable, and it is our duty to hold them accountable on all levels.”

In an effort to invoke action and strengthen their voice, Lambda Theta Alpha created the Political Education Initiative (PEI) Committee in 2012. The inaugural Lambda Hill Days program was held in 2017 along with Lambda Theta Phi Latin Fraternity, Inc. The sorority looks forward to continue growing and improving it for the future.

“We are immensely proud to train our second cohort of sisters who can act as catalysts for change in their respective communities, ” said Monica Cevallos, Chair of the PEI committee. “Advocacy is necessary both at the federal and local level, and now this group is more empowered to return to their areas and apply their experience and knowledge from this program.”

For photos of the two-day program, check out the hashtag #LambdaHillDays on Instagram. The following sisters attended meetings with members of Congress: